Introduction to Rails testing with RSpec and Capybara

Testing is heavily emphasized in the Ruby and Rails community, even the official Ruby on Rails guide has a section dedicated to testing. A lot of Rails job postings usually requires testing skill (Rspec, Minitest etc) as well :

I didn’t understand the importance of testing and used to think writing test was an extra effort (my app already work well when I wrote it, why should I spend extra time to write test for it?), boy I was so wrong 😅.

Now I work in an enterprise handling thousands of transaction per day, I would be very afraid to deploy new update if there wasn’t a solid test suite, without a test suite, I could have broke the payment system on a new deploy, which could cost the companies a lot of $$$ 💸 ! This is why many companies with good engineering practice would require job candidate to possess skill on writing automated test.

Automated test can make us confident in our deploy, ensure there is no regression (ie. new deploy broke old working features), and in contrary, it can make the development process faster too! Instead of filing forms and clicking buttons manually every time you make a change (10 seconds), we can tell Capybara to do this for us (in 1-2 seconds).

This article aims to give you a guideline on how to get started on testing, be it on your newly created Rails app or an existing Rails app that already has some users. We will first write a test to check static content, then move to testing basic CRUD feature.

We will be using Rspec (the testing framework) and Capybara (Browser automation tool to fill in text field, click button) in this article. This article will start from a freshly created Rails app, but you can follow the same instruction on your existing Rails app as well.

You can use any app name you want, the -T flag is used to tell Rails not to use MiniTest. By default, Rails will use a test framework called ‘MiniTest’ if we didn’t specify -T flag, we want to use Rspec as the test framework instead of MiniTest.

Next, create the database of the Rails app so that we can run the app later :

Now, we will install the rspec-rails, capybara and webdrivers gems into our Rails app.

rspec-rails is the rspec testing framework, plus some adopted Rails magic. For example when you run rails generate model User to create user , it will also automatically create a model test file for that user : user_spec.rb .

webdrivers is responsible for downloading the driver needed to control the web browser (eg: chromedriver), and we will use this driver to launch and run automated action on the web browser.

Include these 3 gems in the Gemfile, inside the :development, :test and :test group like this :

If you are using an existing Rails app, the capybara and webdrivers gem might be already included in the :test group, then you only need to add rspec-rails to the :development, :test group.

Then run bundle install to install them.

After installing these gems, we still need to install Rspec into our app using

This will create a few boilerplate files, and update some configuration in our Rails app.

Remember to require the webdrivers gem at the top of spec/rails_helper.rb :

In real life applications, you probably won’t need to write a test just to verify static content, this section serve just as a starting point on writing test.

In this section we will create a page displaying static text, then write a test to verify if the text displayed is exactly what we want.

Start the rails server using rails server , then navigate to localhost:3000/static/index, you should see the page output like this : 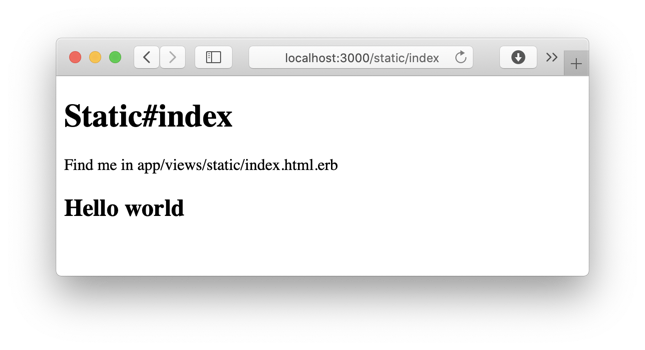 Now that we have created a static page, let’s write a test for it.

Then in your terminal, navigate to your Rails app root path, then run rspec spec/static_spec.rb

You should see Chrome open and it will load the page briefly and close, and a succeeded test :

Congratulation! You have written your first Rspec test (if you haven’t already before 😬) . The convention of RSpec is that all test files must end with “_spec” in their filename.

Below is the explanation of what each line does in the test file.

This line will load the necessary test configuration from spec/rails_helper.rb, which is needed for the test to run.

This line is how we start writing the test, the test code usually reside inside the describe block.

You can replace ‘Static content’ with any string you want, it is for your own documentation purpose.

The type: :system will tell Rspec that this is a system test, which Rspec will then load Capybara and use the browser to run it.

This line is also for documentation purpose, you replace the string with any string you want, but note that the expect() assertion will only works inside a it or scenario block.

The above is equivalent to visit /static/index .

This will tell Rspec to ensure the current page loaded (the special page variable), has the text ‘Hello world’. The have_content method here is provided by Capybara, as it is browser related.

The above syntax might look magical at first, it is equivalent to

With ruby magic, we can omit the parentheses for the to method.

Ensure the test actually work by making it fail

How do we know our test actually work? What if the test we wrote always passes because we didn’t check for enough condition? This might render the test useless as it doesn’t guard us from breaking the feature.

To ensure the test actually work, we can try break it on purpose. As our test check for the text ‘Hello world’, we can modify the view to display a different text, say ‘Bonjour world’.

Then run the same test again :

Sure enough, the test fails : 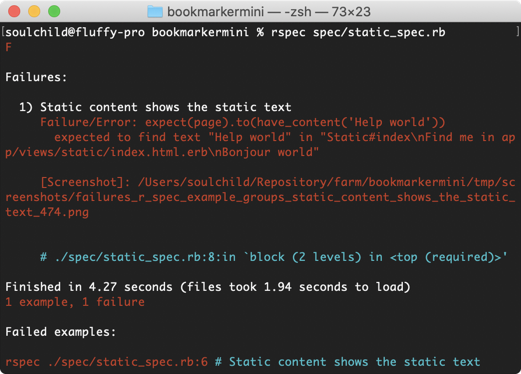 If you are wondering where does the “Static content shows the static text” string comes from, it is from the strings you used in the describe and it blocks :

The strings you used in the describe and it block will serve as documentation when your test goes wrong, to help you pinpoint which part of your test has failed.

The terminal also shows a path to the screenshot for the failed case, which can be helpful to debug why a certain test fail, especially dealing with AJAX calls.

Next, we are going to create scaffold (model + controller + view) so that we can write test for basic CRUD features (create, read, update, delete). Usually scaffold will work out of the box without needing to test it, nevertheless in this section I will try explain my experience / thought on how to test CRUD.

As we don’t want user to input empty values into title and url column, open up db/migrate/…._create_bookmarks.rb and add ‘null: false’ to them

Next, open the bookmark model file in app/models/bookmark.rb , and add validation for presence (not null), and disallow blank value :

Run rails server and navigate to localhost:3000/bookmarks, we can see that Rails already generated views for creating, editing and deleting bookmark model for us :

If we try to create a bookmark with blank title and url, it will fail with error message : 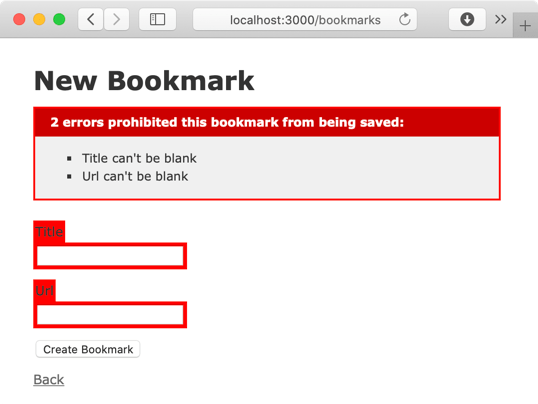 We will get an error message saying the attributes can’t be blank, and no bookmark record will be created in the database, we can proceed to automate checking these in the next section.

For CRUD actions, usually I will place the test (spec) files inside spec/system/<controller_name>, as RSpec recommended in their directory structure. They are called system spec as it allow us to test user interaction using a browser (which uses Capybara under the hood) :

System tests allow you to test user interactions with your application, running tests in either a real or a headless browser. System tests use Capybara under the hood.

To test the creation function of bookmark, let’s create a test file at spec/system/bookmark/create_spec.rb .

We then automate the earlier manual test, which is to create new bookmark with empty title and URL, then ensure we get an error message and no new record is created.

Then run the test using rspec spec/system/create_spec.rb , we should see the test pass, yay!

Next, we can write another scenario for the happy path which will create the bookmark successfully.

If we create a bookmark manually, we would see a success message like this : 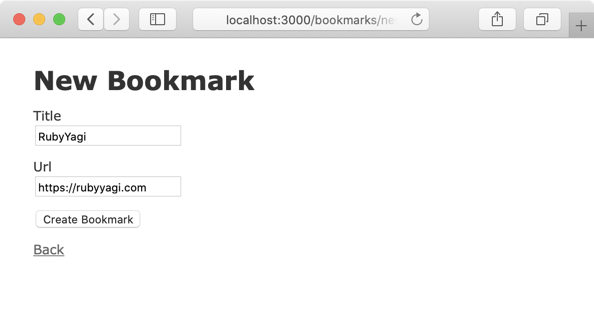 We can use the fill_in method from Capybara to fill in text into the Title and URL text field. We can pass the label of the text field, or name of the input, or id of the input as the first parameter. 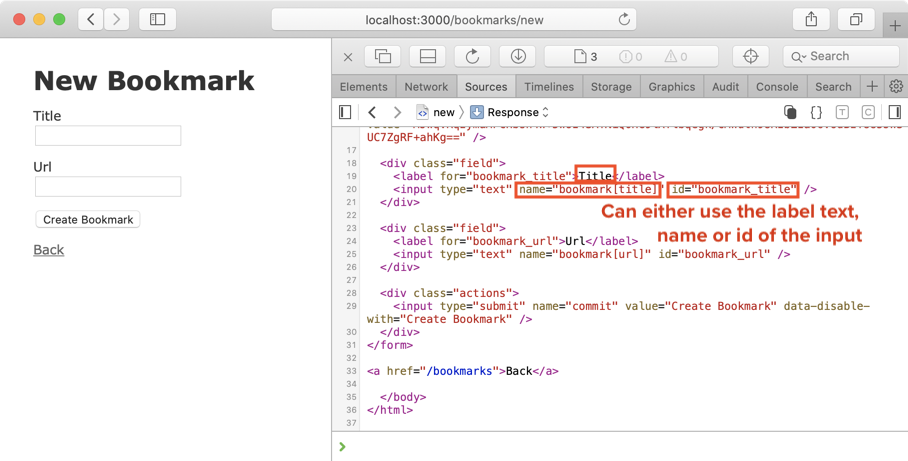 Now that we have a wrote test for the bookmark create action, we can move on to the update action.

If we want to update a bookmark, we would go to the bookmarks index page, click ‘Edit’ on the bookmark we want to edit, change the title or URL, and press “”

Let’s create a new test file for the update action at spec/system/bookmark/update_spec.rb.

For example, let!(:bookmark) { Bookmark.create(title: 'Ruby Yagi') } will be executed before each “scenario” or “it” blocks, it will only execute once and its return value will be cached (subsequent call to it will always return the same value).

You can think of let!(:bookmark) { Bookmark.create(title: 'Ruby Yagi') } as a function like this :

then you can use bookmark method in your test code to access the created bookmark record. Jason Swett’s article on let, let! and instance variables has explained this in more detail.

The click_link is also a method from Capybara, it will tell the browser to click a link that has the text will specify.

The reload method will ask the bookmark (object) to query the database and get its latest value, instead of using the values stored in memory (which we did it in the let! helper method).

At this point, you know the basics of writing test for create and updating a record. I will leave writing test for the delete action and list (index) action for you to complete on your own, try writing your own test! Reading a guided tutorial helps but to reinforce the knowledge you have learned in memory, you have to do type the code on your own.

To run all the test files at once, you can tell rspec to run all files inside the spec/system folder like this :

No idea on how to start writing automated test?

When I first learned writing automated test, I would often get stuck on how to start writing test for a new feature or controller / page I am implementing.

To get unstuck, I would open the web browser and go to the Rails app, run every action manually, like fill in text in this form, click this button, check if the database record is created, check the text that appear in the web browser etc. Then I note them down on a notebook using pencil, then I would try to type the equivalent Capybara or Ruby code for them in the test file.

You can start with manual test first (open web browser and type in text, click button, check result etc), as we are used to this when coding feature, then try to convert the manual action into automated test code.