How to run tests in parallel in Github Actions

How to run tests in parallel in Github Actions

The company I work for has recently switched to Github Actions for CI, as they offer 2000 minutes per month which is quite adequate for our volume. We have been running tests in parallel (2 instances) on the previous CI to save time, and we wanted to do the same on Github Actions.

Github Actions provides strategy matrix which lets you run tests in parallel, with different configuration for each matrix.

For example with a matrix strategy below :

One downside of Github Actions is that they don’t have built-in split tests function to split test files across different CI instances, which many other CI have. For example CircleCI provides split testing command like this :

With split testing, we can run different test files on different CI instances to reduce the test execution time on each instance.

Fortunately, we can write our own script to split the test files in Ruby.

Before we proceed to writing split test script, lets configure the Github Actions workflow to run our tests in parallel.

The ci_node_total means the total number of parallel instances you want to spin up during the CI process. We are using 2 instances here so the value is [2]. If you would like to use more instances, say 4 instances, then you can change the value to [4] :

The ci_node_index means the index of the parallel instances you spin up during the CI process, this should match the ci_node_total you have defined earlier.

Next, we add the testing steps in the workflow :

We pass the ci_node_total and ci_node_index variables into the environment variables (env: ) for the test step.

The continue-on-error: true will instruct the workflow to continue to the next step even if there is error on the test step (ie. when any of the test fails).

And lastly we want to run the custom test script that split the test files and run them ./bin/ci , remember to make this file executable in the previous step.

We will look into how to write the bin/ci in the next section.

Preparing the ruby script to split test files and run them

In this section, we will write the bin/ci file.

First, create a file named “ci” (without file extension), and place it in the “bin” folder inside your Rails app like this :

Here’s the code for the ci file :

You can change this to Dir["test/**/*_test.rb"] if you are using minitest instead of Rspec.

sort will sort the array of path of test files in alphabetical order.

ENV[‘GITHUB_SHA’] is the SHA hash of the commit that triggered the Github Actions workflow, which available as environment variables in Github Actions. 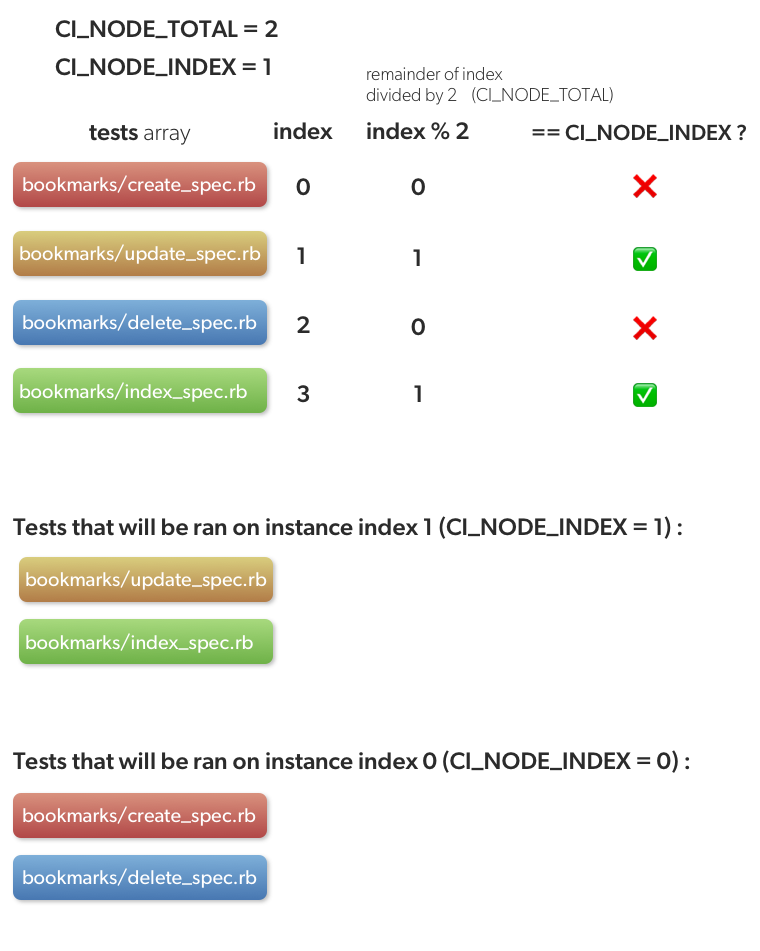 The test files will be split as shown above.

The downside of this split is that the tests will not be splitted based on the duration of the test, which might make some instance running longer than the others. CircleCI does store historical data of each tests duration and can split the test files based on timing, hopefully Github Actions will implement this feature in the future.

I have created an example Rails repository with parallel tests for Github Actions here : https://github.com/rubyyagi/bookmarker

You can check out the full workflow .yml file here , the bin/ci file here , and an example test run here.