Heroku makes deploying Ruby web app a breeze, however it doesn’t run rake db:migrate automatically each time you push a new commit to it.

You might have seen the error screen below after deploying your Rails app on Heroku:

I used to freak out when seeing this, but most of the time it is caused by me forgetting to run rake db:migrate after deploying a feature which has new database migrations.

If you view logs of the app, and see there’s an error saying ‘relation “table_name” does not exist’ , it means the database migration is not run hence no table is created. 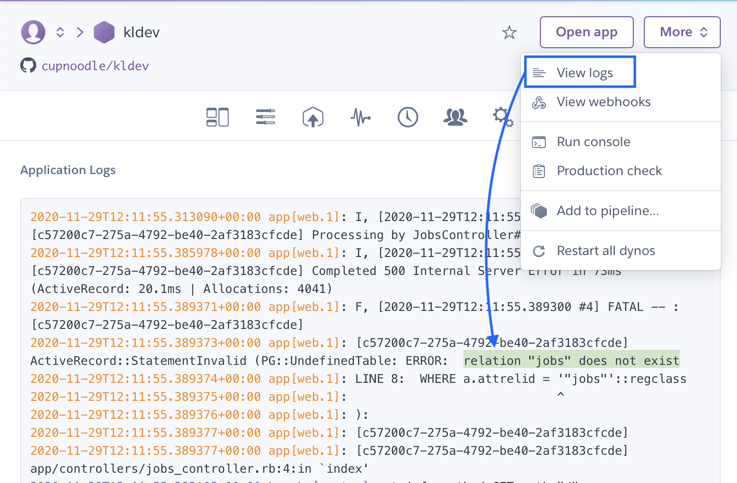 Wouldn’t it be good if there’s a way to tell Heroku to automatically run “rake db:migrate” after each git push? 🤔

Luckily Heroku has a feature named ‘release phase’, it allow us to run tasks after a git push is received, but before the app is deployed.

Release phase enables you to run certain tasks before a new release of your app is deployed. Release phase can be useful for tasks such as:

We can specify the commands to run during release phase in the Procfile file, using the release process type :

In the above Procfile , the “rake db:migrate” command will be run during release phase.

If you want to run multiple rake commands in the release phase, you can put them together like this :

(thanks for the tip Jonathan!)

Alternatively, you can put the commands into a single bash file (eg: release-tasks.sh, located at the root of your repository), then execute the bash file in the release phase like this :

With this, you won’t need to run migration task manually after each git push, and this can make continuous deployment simpler.